The Cuban champion who now lives in Florida knocked down the challenger from Guadalajara, Mexico in the fourth from a straight right.

He got up, but Gamboa pinned him in a corner and pummeled him with punches until referee David Fields stepped in to halt the bout.

Earlier, Gamboa dropped Solis twice in the second round behind a left hook and overhand right, respectively, then flattened him with a left hook to the jaw just before the bell to end the third round.

Most boxing fans are clamoring for Gamboa to take on WBO champion Juan Manuel Lopez, who was in attendance at ringside. 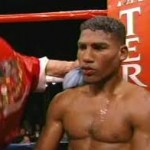