Cardinal Carlo Maria Martini of Italy whose views are too liberal in a highly conservative Catholic church dies at age 85.

Despite his liberal views, he was considered a papal contender going into the 2005 conclave that brought the former Cardinal Joseph Ratzinger, now Pope Benedict XVI, to the papacy.

Martini also wasn’t afraid to discuss issues that, while important to many lay Catholics, are usually considered off-limits by his colleagues.

While not at odds with church teaching, his views nevertheless showed his progressive bent.

The Italian cardinal frequently voiced openness to discuss divisive issues for the church, such as priestly celibacy, homosexuality and using condoms to fight HIV transmission.

Martini, once favored by Vatican progressives to succeed Pope John Paul II and a prominent voice in the church gave a scathing portrayal of a ‘pompous and bureaucratic church’ failing to move with the times.

In the last decade the Church has been accused of failing to fully address a series of child abuse scandals which have undermined its status as a moral arbiter, though it has paid many millions in compensation settlements worldwide.

Martini, once tipped as a future pope, urged the Church to recognize its errors and to embark on a radical path of change, beginning with the Pope.

“Our culture has aged, our churches are big and empty and the church bureaucracy rises up, our rituals and our cassocks are pompous,” Martini said in the interview published in Italian daily Corriere della Sera.

The late Italian Cardinal Carlo Maria Martini described the Catholic Church as being ‘200 years out of date’ in his final interview published following his death on Friday.

The cardinal, a member of the Jesuit religious order, was often critical in his writings and comments on Church teaching.

In 2008, for example, he criticized the Church’s prohibition of birth control, saying the stance had likely driven many faithful away, and publicly stated in 2006 that condoms could ‘in some situations, be a lesser evil’.

Catholics lacked confidence in the Church, he said in the interview. Unless the Church adopted a more generous attitude towards divorced persons, it will lose the allegiance of future generations, the cardinal added.

The question, he said, is not whether divorced couples can receive holy communion, but how the Church can help complex family situations.

Pope Benedict is now faced with a difficult choice, whether or not to attend Cardinal Martini’s funeral in Milan on Monday, which many leading Catholics say would be a powerful affirmation of Church unity.

Thousands of people have been filing past Martini’s coffin at Milan’s cathedral, where he was archbishop for more than 20 years. 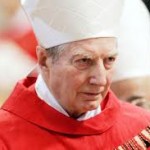