Stiffer arteries and the inability of blood vessels to relax even to healthy people is linked to lack of vitamin D, according to the Emory-Georgia Tech Predictive Health Institute.

Lack of vitamin D can lead to impaired vascular health, contributing to high blood pressure and the risk of cardiovascular disease.

Study participants who increased their vitamin D levels were able to improve vascular health and lower their blood pressure.

The data was presented by Ibhar Al Mheid, a cardiovascular researcher at Emory University School of Medicine, at the annual American College of Cardiology meeting in New Orleans.

The researchers monitored the ability of participants’ blood vessels to relax by inflating and then removing a blood pressure cuff on their arms.

To allow blood to flow back into the arm, blood vessels must relax and enlarge, a change that can be measured by ultrasound.

The researchers also made other measurements of smaller blood vessels and examined the resistance to blood flow imposed by the arteries.

Even after controlling for factors such as age, weight and cholesterol, people with lower vitamin D levels still had stiffer arteries and impaired vascular function, Al Mheid says.

Participants whose vitamin D levels increased over the next six months, either from dietary supplements or ample sun exposure, tended to improve their measures of vascular health and had lower blood pressure. 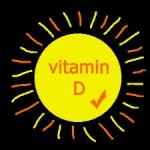