Japan is asking for more test on rice grown near the damaged nuclear plant facility after discovering a high levels of radiation noted on the country’s chief staple crop, according to government officials.

Radioactive cesium was spewed from the Fukushima Dai-ichi nuclear power plant after it was damaged by a massive earthquake and tsunami last March 11 of this year.

A sample of unharvested rice taken contained 500 becquerels of cesium per kilogram, they said.

Under Japanese regulations, rice with up to 500 becquerels of cesium per kilogram is considered safe for consumption.

News of the elevated radiation level in rice from Nihonmatsu city, 55 kilometers (35 miles) west of the nuclear plant, set off alarm in the Japanese media.

The government has been testing vegetables and fish for radiation since the disaster, in which backup generators and cooling systems failed at the plant and the cores of three reactors melted.

Some countries have stopped importing food products from Japan. Japanese consumers are nervous about radiation, but campaigns to buy from Fukushima have gained support around Japan. 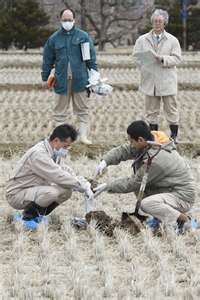