The California Department of Fish and Game has blamed the die-off on oxygen deprivation and is also testing fish for toxins at its animal forensics laboratory. Results are not expected until next week.

Millions of dead sardines removed from the surface at King Harbor marina in Redondo Beach, California, was tested positive for a powerful neurotoxin, researchers said.

High levels of domoic acid were found in the sardines, which may have distressed them off the Los Angeles coastline and caused them to swim into the Redondo Beach marina, University of Southern California biologist David Caron wrote in a summary of his laboratory’s findings.

Domoic acid is often found in the stomach of fish that have been feeding on plankton during toxic algae blooms. The toxin has been linked to neurological disorders, illnesses and deaths in seabirds, sea lions, sea otters and whales.

The presence of the toxin in the sardines could lead to health complications for pelicans, gulls and other sea life that have been feasting on the dead fish.

“There were tons of birds feeding on these fish and it’s conceivable that we’ll see some bird mortality as a result,” Caron said.

The fish died and carpeted the water’s surface, stacking up to 2 feet deep in some places. Crews have already scooped and hauled away more than 85 tons of fish to a composting center where they will turn into fertilizer. 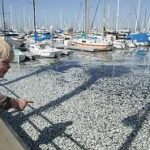 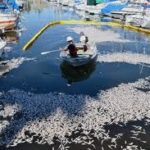 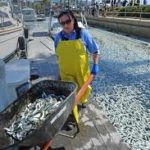