Hawaii is so serious about keeping snakes out that the fine for possessing an illegal animal can reach US$ 200,000 dollars and up to 3 years in prison.

But snake owners are granted amnesty if they willingly turn their pets over.

“No pet snake is welcome because all it’s going to take is the next earthquake, tsunami or hurricane to blow open those enclosures and introduce to the islands all those pets that were kept in a house,” according to Fern Duvall, a wildlife biologist for the state Division of Forestry and Wildlife on Maui.

Residents who unlawfully keep snakes as pets create a giant risk when the reptiles escape or are released into the wild. A 9 foot boa constrictor and 7 foot albino Burmese python were captured this month.

Hawaii has been largely successful in preventing snakes from entering the island paradise over the years and avoiding the grave danger they present to tropical birds, colorful plants and the vibrant environment that draws millions of tourists to the state each year.

Without any natural predators authorities say it wouldn’t take much for snakes to take root and multiply, potentially killing off endangered birds and flowers that make the islands special.

Hawaii, home to more endangered species per square mile than anywhere else in the world, could potentially face the same fate as Guam, where brown tree snakes overran the island following World War II and wiped most birds from the skies.

But the recent capture of escaped pet snakes, illegal in Hawaii and the infestation of Guam by brown tree snakes, which could easily make it here via cargo ship, have alarmed wildlife and agriculture officials.

Besides the snake pet threat, environmentalists also fear that snakes could find their way to Hawaii by hitch hiking on cargo ships, undetected by short staffed agriculture inspectors.

There was a yearly average of nearly 24 snake sighting reported statewide between 1990 and 2000, according to a 2001 study titled ‘Risk to Hawaii from Snakes’ published in Pacific Science.

The number of snake sightings fluctuates from year to year, but they have been steadily , according to Carol Okada, manager for the Hawaii Department of Agriculture’s Plant Quarantine Branch.

If snakes nested and reproduced, it would quickly be too late to stop them and the Hawaiian islands would be changed forever, said Christy Martin, spokeswoman for the state’s Coordinating Group on Alien Pest Species. 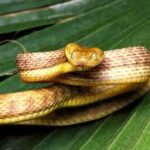 1 thought on “Snakes Are Threats To Hawaii Ecosystem Landscape”