Public perception on tattoo has its ups and lows. It has been associated with a life of crime in the sense that the art of tattoo is prevalent among inmates in jails and security prisoners.

People branded it as a tainted skin art in which the stigma persists up to this time. Some people or establishments, they took care not to hire any person who sported a tattoo especially those proclaiming themselves to be a member of certain underworld gangs or groups.

With this kind of perception, one just can imagine the struggle faced by the modern tattoo industry that is thriving now and other parts of the world.

Despite its negative image, some tattoo artists refused to be intimidated in their quest to meet the level of international artistry in the form of skin art.

There are different in tattoo design art, among them are American tattoo, Japanese/Oriental tattoo, Polynesians portraits tattoo and Tribal tattoo. American tattoo are designs which are symbolic or reminiscent of American culture such as eagles, roses, the American flag and cross bones.

Japanese/Oriental tattoo, which are popular in many parts of the world, are designs which tackle complicated subjects such as dragon, fish, Japanese and Chinese symbols and letters that are intricate and call for a lot of details.

Portraits are specialized tattoos that tackle realistic subjects such as faces and objects usually require meticulous care as most subjects are dear to the client.

Tribal designs are random pattern of lines and curves put together to create an abstract form of art.

In Borneo, tourism is promoted through tattoos acquired from tribes. Tattoos artists there use sticks, bamboos, thorns and ivory for their skin art.

The group also seeks to promote awareness of tattooing as an art form and erase the misconception that skin art is a label for society’s ills.

Members of PhilTAG has to undergo seminars, in which part is devoted to hygiene and sanitary procedures. That way, people will not be afraid to get tattooed here. Many people perceived that the tattoo process as unsafe.

Part of the hazards of the trade for tattoo artists is getting diseases from their clients in case of accidental pinprick and they maybe be agents for the spread of the diseases as well.

Among the common diseases that can spread in tattoo parlors in the absence of proper hygiene and sanitation are common colds, flu, coughs, hepatitis and worse, AIDS.

However, if proper measures are undertaken and strictly adhered to, such incidence will remotely can happen. 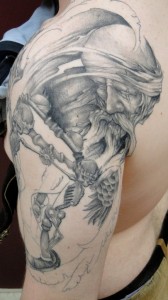