A study has been conducted looking into the effects of root crops and legumes in lowering cholesterol levels in the human body, among them was the cassava which thrives in abundance in tropical countries.

It has also shown that cassava can decrease significantly the (LDL) low density lipoprotein which is known as “bad” cholesterol.

It may also helps in the lowering triglyceride levels due to its high total dietary fiber content. Dietary fiber has been associated with lowering the risk of cardiovascular disease, colon cancer and helps also in the control of diabetes.

Cassava flour does not contain gluten, an allergenic protein found in wheat, barley, oats and rye. It is also known as tapioca flour which it can be used by gluten intolerant people to replace wheat flour. 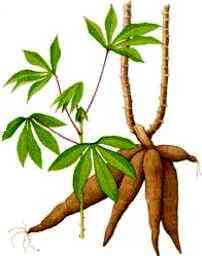 In the US, cassava flour is used to thicken gravy but it has long been used in Asia to make savvy dishes and desserts, like the cassava cake.

Cassava can be used for French fries instead of potatoes. In Central America, specifically Costa Rica and Nicaragua, boiled yucca is an ingredient in salad and other dishes, while cassava flour has been used for making lasagna noodles.