Dog walking was highest among the young and educated, with 18 to 24 year old owners twice as likely to walk the dog as those over 65, and college graduates more than twice as likely as those with less education.

Younger dogs were more likely to be walked than older dogs. While larger dogs (20 kgs. or more) were taken for longer walks than smaller dogs.

The question remains whether owning a dog encourages regular activity or whether active, healthy people are simply more likely to acquire dogs as walking companions.

Researchers from Michigan State University said that among dog owners who took their pets for regular walks, 60 percent met United States government criteria for regular moderate or vigorous exercise. Nearly half of dog walkers exercised an average of 30 minutes a day at least five days a week.

The dog walkers had higher overall levels of both moderate and vigorous physical activity than the other subjects, and they were more likely to take part in other leisure time physical activities. On average, they exercised about 30 minutes a week more than people who didn’t have dogs.

Several studies now show that dogs can be powerful motivators to let people moving and keep fit. Not only are dog owners more likely to take regular walks, but new research shows that dog walkers are more active overall than people who don’t have dogs.

One study even found that older people are more likely to take regular walks if the walking companion is canine rather than human.

Human walkers often complained about the heat and talked each other out of exercise, but that people who were paired with dogs didn’t make those excuses, according to Rebecca A. Johnson, director of the human-animal interaction research center at the University of Missouri College of Veterinary Medicine.

A study of 41,500 California residents found that dog owners were about 60 percent more likely to walk for leisure than people who owned a cat or no pet at all. That translated to an extra 19 minutes a week of walking compared with people without dogs.

A Western Australian study in 2008, found that one of the motivations for getting a dog was a desire to get more exercise. Before getting a dog, the new dog owners had clocked about 89 minutes of weekly walking, but dog ownership boosted that number to 130 minutes a week. 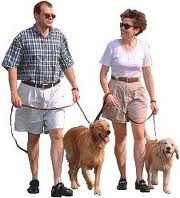