Rutin is an antioxidant, that may protect your body from inflammation, blood circulation problems and cell damage caused by free radicals.

The soluble compound is found in some of the fruits, vegetables and other plant foods.

Sources of rutin are asparagus, citrus fruits, berries, apples (peelings). Apart from that, black or green tea, buckwheat and many other food items derived from plants are found to contain rutin in fair amounts.

Rutin have been shown to have an inhibiting effect on cancer cell metabolism and protects against cardiovascular disease.

Being an antioxidant, rutin attaches to metal ions like, iron and prevents the reactions that form free radicals, which are responsible for some of the major health problems like, cancer.

Rutin can help reduce tumors in colon cancer and has a preventative effect in diabetes.
It inhibits the formation of cataracts and can be used to treat and prevent the symptoms of asthma and allergies.

It is good for the circulatory system, as it makes the capillaries stronger and improves blood circulation.

Rutin also acts as a blood thinner and prevents blood clotting. Harvard researchers found that the chemical helped block a potentially dangerous enzyme involved in the formation of blood clots.

This enzyme called protein disulphide isomerase is released very quickly when blood clots form in the arteries and veins.

Professor Robert Flaumenhaft, from the Harvard Medical School said: ‘Rutin proved to be the most potently anti-thrombotic compound that we ever tested in this model.

‘Clots occur in both arteries and in veins. Clots in arteries are platelet-rich, while those in veins are fibrin-rich. This discovery suggests that a single agent can treat and prevent both types of clots.’

Blood clots, or thromboses, occur in arteries and vein and restrict the flow of blood. They can become dislodged and move to other parts of the body.

If a clot occurs in one of the main arteries leading to the heart it causes a heart attack.

A clot occurring in an artery leading to the brain causes a stroke.

Rutin as a flavonoid is found to be beneficial in controlling and preventing hemorrhoids, varicose veins and skin bruising.

Rutin aids the body in utilizing vitamin c and maintains the level of collagen in the skin, to prevents signs of aging, such as wrinkles and skin damage.

It has also an anti-inflammatory properties, which are good for alleviating inflammation caused by diseases. It may be beneficial in reducing venous edema of the legs. 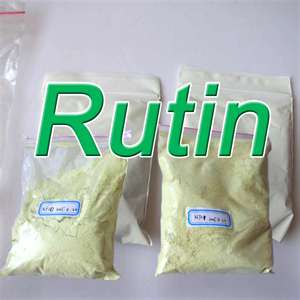