Vitamin E, which occurs naturally in cereals, nuts, olive oil and egg yolks, is credited with helping hold back the hands of time by ‘fighting aging from within’.

Benefits are said to include cutting the risk of heart disease, cancers and cataracts, as well as helping keep the mind sharp into old age and the skin supple.

It is for this reason that vitamin E tablets are one of the world’s most popular supplements, taken daily by hundreds of thousands or if not millions in the UK.

In the US, more than one in ten adults take vitamin E tablets.

The relationship between nutrients such as vitamin D and bone health are well established, but there is far less research which looks at the role of vitamin E.

Although some early studies suggested that consumption of the vitamin had a positive effect on bone mass, the Japanese team found the reverse was true, with bone health improving in the dietary source vitamin E deficient mice, and losing bone mass when given vitamin E supplements.

Writing in the journal Nature Medicine, the Keio University team said mice given large doses of vitamin E supplements had lower bone mass, if the same was true in humans, fracture risk would be enhanced.

The size and density of bones in the body is not fixed in adulthood, but dependent on a balance between cells which lay down new bone, called osteoblasts, and cells which strip it away, called osteoclasts.

The researchers suggested that vitamin E supplements could encourage the formation of osteoclast cells, which meant more bone was lost than would be laid down.

In another experiment, giving normal mice alpha-tocopherol vitamin E supplements at doses equivalent to those taken by people, led to their bones thinning by a fifth in just two months.

Professor Helen MacDonald, who researches the influence of nutrition on bone health at Aberdeen University and also an advisor to the National Osteoporosis Society, said:

‘There is nothing to worry about if you are getting plenty of vitamin E from your diet but those taking high doses of the nutrient in supplements need to be wary.

She stressed there was no reason for people to change their diet to avoid the relatively small amounts of vitamin E contained in it.

She said, ‘However, vitamin E supplements involve doses far higher than those in a normal diet.

“There is increasing evidence that taking supplements doesn’t do any good, and if anything, may be doing harm.”

In the UK, there is an estimated three million people with osteoporosis, with 230,000 breaking their weakened bones each year and about 1,150 people dying each month after incurring a fractured hip. 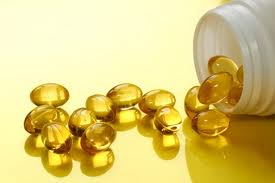