Elderly people with higher levels of certain vitamins and omega 3 fatty acids in their blood score better on mental acuity tests than those who eat junk food, a new study published in Neurology, the journal of the American Academy of Neurology.

A diet rich in vitamins and fish may protect the brain from aging while junk food has the opposite effect, research suggests.

Higher intake of transfats, commonly found in fried foods, fast foods and other less healthy diet options, did not perform as well on cognitive tests.

The best current advice is to eat a balanced diet with plenty of fruit and vegetables, not smoke, take regular exercise and keep blood pressure and cholesterol in check, said Alzheimer’s Research UK.

Researchers at the institute at Oregon State University carried out and analyzed blood nutrients level of 104 people at an average age of 87, specifically with few known risk factors for Alzheimer’s.

They found those who had more vitamin B, C, D and E and high levels of omega 3 fatty acids, found mainly in fish in their blood performed better in tests of memory and thinking skills.

The poorest scores were found in people who had more trans fats in their blood. Trans-fats are common in processed foods, including cakes, biscuits and fried foods.

Co-author Maret Traber of the Linus Pauling Institute at Oregon State University said: “The vitamins and nutrients you get from eating a wide range of fruits, vegetables and fish can be measured in blood biomarkers.

Study author Gene Bowman of Oregon Health and Science University said: “These results need to be confirmed, but obviously it is very exciting to think that people could potentially stop their brains from shrinking and keep them sharp by adjusting their diet.”

Researchers found that while age and education affected performance on the cognitive tests, nutrient status accounted for 17 percent of the variation in scores, and 37 percent of the differences in brain volume. 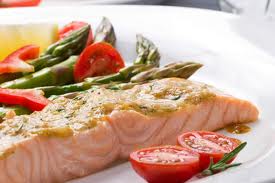