A study has revealed that today’s eggs contain 70 percent more vitamin D and double the amount of selenium, which is linked to lower risks of cancer and cardiovascular disease, infertility and infections, when compared with eggs three decades ago.

The data, produced by the UK Foodcomp project consortium, funded by the Department of Health as part of their rolling program of nutrient analysis surveys, provides the first update on the nutrient content of eggs since the 1980s.

A change in the feed given to chickens has resulted in healthier eggs but the trend for buying larger eggs has led to there being less yolk to white.

This is because of the preference for bigger eggs now compared with 30 years ago. The size of the yolk remains the same in a large egg as in a medium one, with larger eggs simply containing more white.

Vegetable oils replaced meat and bonemeal in UK hens’ feed in the 1980s and it is believed that better quality oils, together with other enhancements to hens’ feed, have improved the hens’ absorption of fat-soluble vitamins and the take-up of nutrients. 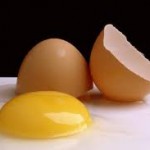