In their study, researchers analyzed the juice consumption of 3,618 children ages 2 to 11 using data from the National Health and Nutrition Examination Survey.

The bottom line, is that one hundred percent juice consumption is a valuable contributor of nutrients  in children diet and it does not have an association with being overweight, a child nutrition specialist at Baylor College of Medicine in Houston has said.

There are at least seven studies made that show no associations between 100% pure juice intake and being overweight among children.

The average daily consumption of pure fruit juice in the study population was 4.1 ounces (about half a cup), an amount in line with the recommendation from the American Academy of Pediatrics.

And while there were a few children (13 percent) who consumed a larger amount of juice (12 ounces or more), their intake was not associated with overweight or at risk for being overweight.

It was noted that children in the 2-3 year old category who drank the most juice  were nearly three times less likely to be overweight or at risk of overweight than children who drank no juice at all.

The child nutrition specialist encourages parents who are concerned about their child being overweight to look beyond their juice consumption.

The word of advice is to look at the total number of calories that the child is taking and find out where the bulk of those calories are coming from. Equally important, look at the level of activity the child is in. 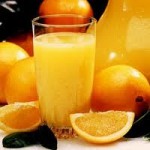